Today I had the amazing privilege of going to work with Jessica Dehm.  Jessica is the mother of twin 3 year old boys.  Jessica has been going to school most recently, is a substitute teacher at times, and is quite the organizer but her main job is raising these two amazing little boys, Michael and Jacob.  So she invited me to spend a few hours on a typical morning to her most important work.

I was excited to go and see them! I love this family and the boys give me great delight! From day 1 of meeting them, I could tell their little personalities are amazingly different. They compliment each other so well and Jessica (and Luke) do a fantastic job of raising them to be loving, caring, and adventurous little creatures.

I got to their house a little after 9am. I had texted Jessica to make sure they still wanted me since I woke up with a cold this morning. She didn’t seem to flinch. I think this might be lesson number 1 in raising kids, especially twins. A little snot doesn’t hurt and is pretty much a staple.  The boys were still in pjs, munching on cereal and watching a bit of tv and were pretty excited to see me.  Jessica commented that they needed to get movin and the chaos began because it was time for full show off to Courtney mode.  I, of course, needed to see the trucks and the crazy faces and the new kitties and get a tour of the house, inside and out. I even got to push Jacob on the swing to go fast and high.  I love it!

After I had been shown around and the boys dressed, it was snack time before going to Imagine Play, this amazing play place in town for kiddos that has just opened.  The snack looked pretty delish, the pineapple especially. I was even offered a few pieces… 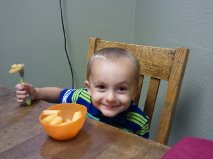 Michael is such a goof although quite a bit quieter than Jacob.  Although Michael also doesn’t get as embarrassed at Jacob so the crazy noises and faces keep coming to keep me laughing.

Then we were off to Imagine Play, the boys were excited while Jessica and I loaded up on more coffee.  She is so real with the boys and accessible while still teaching them their independence. They know exactly what to do and when.

When we got into Imagine Play the boys told me about taking off my shoes and exactly where I should look on as they played.  The first and most popular stop today? The bouncy house and slide!

While the boys played, we chatted and said hey to other parents.  It was good to just be with Jessica and the boys and to allow them to show off a bit.  My favorite thing to watch? The airplane…these boys know how to fly! 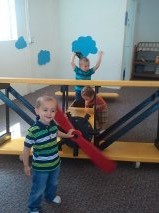 After about an hour it was time to head home and as we left Jacob promptly exclaimed, “Lets go home so I can play with you!” I was excited.  So we loaded up the boys and went home to which Jacob handed me my truck to play with.  I hung out a bit more and then it was time for me to head back to the church.

I am grateful for this chance to see just a glimpse of a busy day.  Jessica keeps the boys moving and learning with just the right balance of activity to rest and food.  Time flew by and I will be back soon. Thanks you guys!