Good morning!  How is this week going for you? Happy birthday to one of my lovely sisters in law Madeleine!  Enjoy the day! 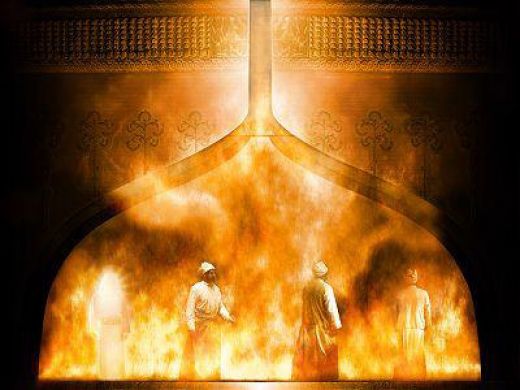 I feel like we have all felt as though we have walked into fire now and again.  Sometimes situations are just too hot for us to be there and handle.  I know that when I get really stressed about all of the things I have to do I feel as though I am just wading through. Or when there is intense conflict it feels as though it is just too hot to be around.  It would be easier to just leave, wouldn’t it? And yet sometimes we really can’t just turn around and take off we have to only go through it.

Last Sunday morning when we were talking about not avoiding suffering, the worship assistant at our 930 service, Dana Smothers, talked about if we avoided suffering we would miss moments of God’s sweetness to help us walk through it.  Instead of the human experience, she wanted to call it the human opportunity.  Surely, God’s sweetness shows up in our Daniel story today. God shows up to be with the three as they walk through fire, not avoiding it because they really can’t but walking with them as they have to deal with the heat.

This has been my experience in dealing with fire.  When I sit with the fire and breath in different ways to survive, all of a sudden God tends to show up (not saying that you have to endure the pain just because of pain). But what if we expected God to show up?  In those moments of walking in the heat, God will show up in the form of some other being to walk with…not to solve or to decrease or even to cause…but to walk with.

Where have you walked with fire lately? What did it feel like? How did you come out on the other side?  Who was there with you?