A dear friend of mine recently handed out 10 dollars to each family unit in the church that she serves.  Based off of this scripture, she decided to invest her money in an idea from the church.  This was money (about 500 dollars) that she was planning to donate to the church anyway and thought it might be interesting to have a modern day parable of the talents. On a Sunday morning she handed out 10 dollar bills to families and invited them to do something with the money, to offer up their talents.  The idea was that you really can’t fail in this.  If you make money for the church, awesome.  How could you do that? At the end of some time there appeared a “talents table” at the end of worship where people offered up their wares of things they made with the 10 dollars.  If a family didn’t want to utilize the ten dollars they could put the money back in the offering plate…that was the original money plan.
I recently saw this friend after this all happened.  She had wares to give to the people gathered around the table that she had bought at the Talents Table. We asked her how it went. She told us stories of the man who offered electrical work with his 10 dollars and the household wrote a larger check.  She told us of all of the crafts and food items offered on the table.  These particular talents doubled the original sum.
The question becomes two fold. If you knew that you would not fail where would you spread your talents? AND What talents could you offer today?
Where could your talents be needed or welcomed? And of course, here talents mean money but beyond that they mean what you are good at.  People decided that they could offer electrical work, soups, wine charms, beads, and who knows what else was on that table or offered out there. 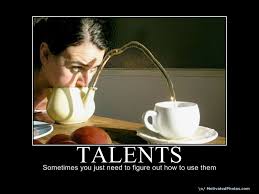 Is your mind already thinking? Enjoy.
Prayer: O God, you have put in us wonderful qualities, skills and talents.  Allow us to get creative to see how we might use them today in your world. Amen.