Good morning all!  Here we are…final stretch into Christmas Eve…and second to last devo for the season.

Today’s scripture: Luke 1:46-55 (NRSV) And Mary said, “My soul magnifies the Lord, and my spirit rejoices in God my Savior, for he has looked with favor on the lowliness of his servant. Surely, from now on all generations will call me blessed; for the Mighty One has done great things for me, and holy is his name. His mercy is for those who fear him from generation to generation. He has shown strength with his arm; he has scattered the proud in the thoughts of their hearts. He has brought down the powerful from their thrones, and lifted up the lowly; he has filled the hungry with good things, and sent the rich away empty. He has helped his servant Israel, in remembrance of his mercy, according to the promise he made to our ancestors, to Abraham and to his descendants forever.” And Mary remained with her about three months and then returned to her home.

Last night my Aunt Martha called together all of the “kids” of the family to go to the Zoo lights together.  Since my brother Andrew and his wife Madeleine flew in yesterday at about noon, we all thought that this would be a great idea!  This would be a way that we could all be together just before Christmas and throw in something really fun in the mix.  Plus there are many of us that love looking at lights, my Aunt Martha (AMar as we call her) being one of them…I remember when we really were kids and we would go with her to this.  As I arrive, I realize something…this is going to be pure chaos.  I hadn’t really even thought about it.  Pretty soon the texts start coming from the other brothers…”This is so crazy.” “We are close but the traffic is horrible”  “we are here, where are you?”  “There are so many people!!!”

Even though the texts where coming in I thought, no, this would be good for us.  We can do this!  A little piece of me thinks that next year  we should just arrange a really fun dinner in Portland but this would work for us this yeah. I mean, how often do I get to just hang with my brothers and my sisters in law…or even just with my aunt and uncle?  So I bundled up, with a few extra layers, and waded through the cars (I somehow got a parking space), and met up with my aunt and uncle at the entrance.  We were the only ones there so far…so we waited, and waited…an waited…Andrew and Madeleine showed up (by the point my toes were starting that cold ache)…and then we waited and waited and waited.  Finally, the others arrived and we headed into Zoo lights with gusto (mainly because it was quite chilly last night).  By this point, a few of us were ready to be just about done before we even began but now we had the resolve to do this thing.  Oh yeah, and did I mention, there were a gazillion people around us? Many many small children running around in the lights and in the dark.

Then it happened for me….I looked up.  The lights were gorgeous and I was hanging out with some of my fav people in the world.  At one point, Carrie (Colin’s girlfriend) and I are giggling at the lit up giraffe, and at another point my sisters in law and I are all plotting what dishes we are planning on making for Christmas, and at another point my brothers and I are all laughing and hugging on each other.  What a gift my aunt gave us beyond the entrance fee!

Now at each turn we did have a challenge, we had to decide who was going to lead us to the next location.  And as the oldest, I might have gotten a little bossy at times.  But we made it happen, we picked a direction and continued to have a good time until all of our noses and toses were completely frozen and we had to part ways for the night.  We hugged and promised to see each other in a few days.  What a great night!

Now why do I bring all of this up?  Well, today at the CoOp we are talking about rethinking power.  The main topic will be about how Mary sings out God’s reversal of power.  Power in the kingdom of God is not about who has the most authority or money or control, power is about what God is doing for the lowly, oppressed and marginalized. Mary sings this out.  It fills her with so much joy and anticipation that she has to sing out what God has done for her in reversing power.  She has to sing out in megaphone style what God will be doing in the future and where God cares about relationship.  She sings out her current attitude of what God will continue to do. She sings out that she is a servant of God and willing to carry that power within her.  It all shifts. 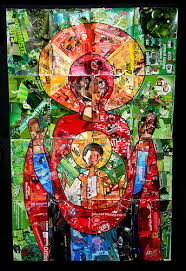 While today I will be talking about all kinds of power reversals, last night a power reversal came into play for me and it was about rethinking which power got to control my night.  If I were to give in to that voice of, “this is way to crowded, chaotic and cold” all night I would have missed connecting with others in my family and the beauty around us.  Instead, in those moments, we have to take a breath and look around at all of the fabulous light.  This will carry me through the season. The temptation is to give power to all of the chaos, busy ness, breathlessness, and crazyness. But take a moment, take a deep breath and look at who you get to connect to, the lights around you and the chance to live into a new memory..whatever that memory could be.  Instead of giving power to the loss, or the grief, or the darkness totally (must acknowledge that it is there and sucks), give power to the silence, the reflection, the light that surrounds you and the promise of a new tomorrow.