Today’s scripture: Exodus 32:7-14 The Message
God spoke to Moses, “Go! Get down there! Your people whom you brought up from the land of Egypt have fallen to pieces. In no time at all they’ve turned away from the way I commanded them: They made a molten calf and worshiped it. They’ve sacrificed to it and said, ‘These are the gods, O Israel, that brought you up from the land of Egypt!’” God said to Moses, “I look at this people—oh! what a stubborn, hard-headed people! Let me alone now, give my anger free reign to burst into flames and incinerate them. But I’ll make a great nation out of you.”


Moses tried to calm his God down. He said, “Why, God, would you lose your temper with your people? Why, you brought them out of Egypt in a tremendous demonstration of power and strength. Why let the Egyptians say, ‘He had it in for them—he brought them out so he could kill them in the mountains, wipe them right off the face of the Earth.’ Stop your anger. Think twice about bringing evil against your people! Think of Abraham, Isaac, and Israel, your servants to whom you gave your word, telling them ‘I will give you many children, as many as the stars in the sky, and I’ll give this land to your children as their land forever.’” And God did think twice. He decided not to do the evil he had threatened against his people. 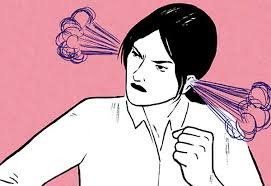 When I get angry my voice gets pretty low.  My face gets pretty solid.  I remember every detail of the conversation that has just happened.  I have even been known to growl a time or two particularly if I am angry at something I see on my computer.  When I get upset with people, the world gets super clear in my head for just that moment and I have to have a conversation to clear it up.  Sometimes in friendships or even working relationships a stepping stone comes in when we get angry at each other and can deal with the situation honestly.  I worked in Corvallis for four years with Jim Fellers and I remember one time looking at him and saying, “I am really angry at you right now.” And he replied that he was angry with me and we dealt with it and I would say our friendship is stronger because of the conversation.
When I meet with people and they are angry at God, somehow along the way they got the impression that they couldn’t be angry with God.  And that becomes really unhealthy because when you can’t be angry at God you get angry at a bunch of other stuff or really depressed that you can’t deal with God about this emotion.  When people tell me that they are angry with God I tell them, “good, go yell at God.  God can handle it.” And it’s true.  I think it is super healthy to go out to your backyard and scream at God or at least let God know that you are upset.  I tell God when I am angry because God is bigger than I can imagine and can handle my emotion. In fact, when I am honest with God about just how upset I am, I feel it makes our relationship stronger.  God has a chance to get my full range of emotion. Yes, I am angry that the world is full of dying kids. I am raging that stuff happens to good people. I am most angered when I lose someone I love.  It really pisses me off. And God can handle that. I feel better for letting God know. 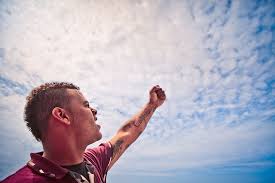 What I love about the passage above though is that God is angry and let’s Moses know.  Then Moses is the one that talks God down. Because of the honest conversation, God changes God’s mind.  We don’t see this often in the Bible…God changing God’s mind in a conversation.  The people are saved because of it and remind God that they are just human. Yes, they messed up but God’s grace wins after God gets angry.  Yes, even God sometimes can’t handle God’s anger.  But at least God talks about it.  These folks have gone astray and for a moment it looks like it will be all over.  But in the face of anger, Moses keeps his cool.  Moses knows that God doesn’t really want to get rid of these people. God loves these people.
In the face of anger coming at us, can we keep our cool long enough to have the conversation? That’s the other end of this deal.  If God is willing to listen to us, are we willing to listen to a response? Or when you share your anger to your friend, are you willing to be calmed down and given another chance? or hear the response about their anger? That’s how this is all going to work out in the end.  Who knows, maybe you and God can have an honest conversation and you get to talk God down  in the mix?

Today release your anger if you’ve got it.  Go out and scream about it. Talk to God about it.  Have a conversation. It can be a healthy tool in creating and maintaining relationship.  Plus recognize that anger happens…it is how you deal with it, that’s key.
Peace,
Court