Today’s scripture:JOHN 6:1-15
After this Jesus went to the other side of the Sea of Galilee, also called the Sea of Tiberias. A large crowd kept following him, because they saw the signs that he was doing for the sick. Jesus went up the mountain and sat down there with his disciples.  Now the Passover, the festival of the Jews, was near. When he looked up and saw a large crowd coming towards him, Jesus said to Philip, “Where are we to buy bread for these people to eat?”  He said this to test him, for he himself knew what he was going to do. Philip answered him, “Six months’ wages would not buy enough bread for each of them to get a little.” One of his disciples, Andrew, Simon Peter’s brother, said to him, “There is a boy here who has five barley loaves and two fish. But what are they among so many people?” Jesus said, “Make the people sit down.” Now there was a great deal of grass in the place; so they sat down, about five thousand in all. Then Jesus took the loaves, and when he had given thanks, he distributed them to those who were seated; so also the fish, as much as they wanted. When they were satisfied, he told his disciples, “Gather up the fragments left over, so that nothing may be lost.” So they gathered them up, and from the fragments of the five barley loaves, left by those who had eaten, they filled twelve baskets. When the people saw the sign that he had done, they began to say, “This is indeed the prophet who is to come into the world.” When Jesus realized that they were about to come and take him by force to make him king, he withdrew again to the mountain by himself. 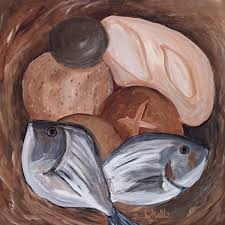 This weekend was incredibly full.  It actually started Thursday night when I went to an opening of a photo exhibit called “Coming out as a person of faith for marriage equality.” This was a Basic Rights Oregon event and they expected maybe 50 people to come and support them at Augustana Lutheran in Portland.  There were soooo many people crammed into one littleish room. I would guess 150 people were trying to wander around that room and spilling out into the hallways.  wow. Afterward, I went to see my friend Jim to catch up at an awesome little Irish pub.
Friday I spent most of the day in my garden (yay) and then went to two different gatherings to see friends around town.  On Saturday I got up and drove to Salem to teach the last Congregation Leadership Development course this time around (a course that teaches churches leadership in their contexts…5 hours on a Saturday once a month for 6 months) and from there I came back to Mac for a memorial and then a dinner for our Community Compassion Fund (a fund in our church that fills in the gaps).  Phew!
Yesterday morning I woke up for church (yay) and then stayed for tacos to support our Mexico mission team and then had a church council meeting that felt productive with awesome leaders.
And then I rested. What struck me about all of these events was that I definitely did not go hungry and it was important for each event to have some sort of gathering around food.  I did not go hungry this weekend and it was all great food!  Cheese, fruit, veggies, tacos…it was a good food weekend.  At each location people gathered around either nibbles or a meal as they chatted.  During the teaching event, lunch is an essential place to make connections and talk about who we are as people in our contexts.  The reception after the memorial was essential to processing what just happened and to laugh and cry with people we normally don’t get to do that with.  Worship culminates in gathering around the table for bread and wine.  Tacos were a lovely moment where I got to sit at a table with a bunch of kids and adults and catch up.  And the Community Compassion Dinner was were I met a new family and giggled until we had juice coming out of our noses…the food was amazing too. We definitely talked about it. In all of these places it was important to take a moment to enjoy the other.  When I sat at a table with people it was even better.
Jesus is no different then to make food an essential ministry moment.  A meal takes place and miracles happen. Somehow food is magnified and what I love about the John passage is that even the fragments are collected to see the whole picture. I also love that Jesus makes them sit down to receive.  This is not fast food this is a meal.  Fragments are collected to show just how much abundance the people have in the face of scarcity.  Didn’t think it could happen. People said that there wasn’t any food and yet look at all of this wealth?  There is even wealth in the fragments left over!!  The meal comments on sacredness, wholeness, abundance, and moments of God’s people gathering. 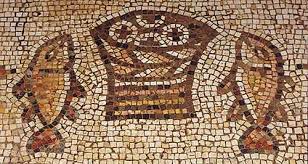 Please sit down to a meal with people today.  Gather at a table.  Share a story. Talk about your day.  Enjoy the abundance of your people, the sacred moment of the table, and look at the fragments left behind.  And here is a blessing from Jan Richardson for when you do…

Cup your hands together,
and you will see the shape
this blessing wants to take.
Basket, bowl, vessel:
it cannot help but
hold itself open
to welcome
what comes.

This blessing
knows the secret
of the fragments
that find their way
into its keeping,
the wholeness
that may hide
in what has been
left behind,
the persistence of plenty
where there seemed
only lack.

Look into the hollows
of your hands
and ask
what wants to be
gathered there,
what abundance waits
among the scraps
that come to you,
what feast
will offer itself
from the fragments
that remain.