Good morning all!  Just as a reminder…if you miss a day or want to go back and have deleted the email you can always go to pastorcourt.wordpress.com to see previous days. 🙂

Now the wife of a member of the company of prophets cried to Elisha, ‘Your servant my husband is dead; and you know that your servant feared the Lord, but a creditor has come to take my two children as slaves.’ Elisha said to her, ‘What shall I do for you? Tell me, what do you have in the house?’ She answered, ‘Your servant has nothing in the house, except a jar of oil.’ He said, ‘Go outside, borrow vessels from all your neighbors, empty vessels and not just a few. Then go in, and shut the door behind you and your children, and start pouring into all these vessels; when each is full, set it aside.’ So she left him and shut the door behind her and her children; they kept bringing vessels to her, and she kept pouring. When the vessels were full, she said to her son, ‘Bring me another vessel.’ But he said to her, ‘There are no more.’ Then the oil stopped flowing. She came and told the man of God, and he said, ‘Go, sell the oil and pay your debts, and you and your children can live on the rest.’ 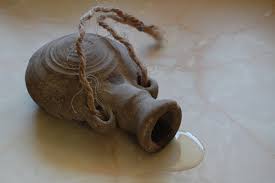 Here is why I love the Bible sometimes….I don’t know that I have ever looked at this story before.  And here it is in the daily lectionary (according to the ELCA daily lectionary). I don’t normally even look up passages in 1 or 2 Kings but I thought…”hey, I should look this one up just in case.” Here this is this fabulous story about Elisha and a widow asking for help.  Elisha, the prophet in these books, gives a way for the widow and her children can experience both generosity of neighbors and abundance of God.  All around oil. 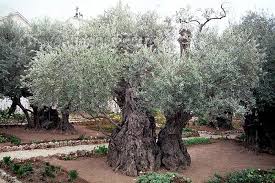 Oil was necessary and a bit expensive.  Oil was currency but also a day to day item in food and fuel.  Oil could be sold for enough to live off of. It works! She continues to fill jars until all of the jars are full. She doesn’t try to trick God into more but experiences abundance in full, sells the oil and all was taken care of. Her children weren’t taken away from her and we as the reader can guess that they lived on with what God had given them.  What a great story!

Abundance seems to keep coming up, doesn’t it? Just the other day we talked about the loaves and the fishes and what was left over. Yesterday I wrote about the abundance in Sabbath and Jubilee times.  I seem to be getting that perhaps God is telling us over and over again about abundance, not scarcity.  Why are we so quick to go to scarcity? Why do we continuously hear that we just don’t have enough around our culture?  How would it change how we go about our days if we thought in terms of abundance instead of scarcity?  The world has enough food but we don’t distribute well.  The world has enough wealth but again there is a distribution problem. We have enough time to do what we need to do…let’s stop saying that we are so busy and prioritize, eh?

Ok, that is enough of my preaching for the day. 🙂  I belong to McMinnville Women’s Choir and we sang a few songs in a concert last week so I thought for sure that the women wanted to take last night off.  When it was suggested the majority of the choir said, “no! we want to sing!” I quietly rolled my eyes…I could have used a day off.  I went to dinner with a friend last night and postponed the meal a bit (we were catching up and it was awesome to see her! :)) and then finally said, “I guess I should go to choir.” I was not feeling abundant of energy.  I wandered by the church and thinking all along the way that I could bail if I wanted it. It wouldn’t be unreasonable to take a night off…long day of meetings, etc.

But I went in and about 12 women were sitting in a circle sharing about the concert and getting ready to sing. So I joined the circle and the Betty had us start to sing.  We spent our hour and a half on songs that were call and response, songs we knew by heart, songs we were learning by ear and it was a fabulous night. I felt more connected to those women then I had at the concert. It was a lovely night that fed the soul.  I leaned into what abundance was being offered even in my reluctance.

Will you do the same today? Now. Here. This.