Good morning all! We are definitely in the homestretch now….

Then came the day of Unleavened Bread, on which the Passover lamb had to be sacrificed. So Jesus sent Peter and John, saying, “Go and prepare the Passover meal for us that we may eat it.” They asked him, “Where do you want us to make preparations for it?” “Listen,” he said to them, “when you have entered the city, a man carrying a jar of water will meet you; follow him into the house he enters and say to the owner of the house, ‘The teacher asks you, “Where is the guest room, where I may eat the Passover with my disciples?”’ He will show you a large room upstairs, already furnished. Make preparations for us there.” So they went and found everything as he had told them; and they prepared the Passover meal. 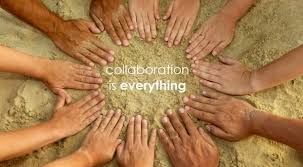 On Saturday as I mentioned before, Betty and I were at the TEDx conference in Portland. My absolute favorite talk was from a local artist in Portland named Gary Hirsch. His talked was entitled, “Meet Your Monster.” When Gary was a kid he had nightmares.  In his nightmares a monster would walk into his room, grab him from his bed and eat him.  These nightmares were so terrifying and realistic that he would go into his parents room and call out his dad.  His dad would get up with him, take him to the kitchen, and have him draw the monster of the night.  After the monster was drawn he would say to Gary, “let’s name your monster.” So together they would name the monster and sometimes his dad would had him an eraser and have Gary erase the monster.  The majority of the drawings were kept and Gary was showing some of them to us.  They looked a little like this…. 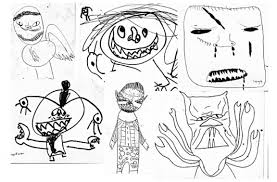 Later on when Gary saw that much of his art would be monsters he realized the effect of naming them with his dad.  The pieces were not complete on his own. Together they named him. So when Gary makes monsters like this now…

This is brilliant.  The reality is that we really can’t do it on our own. We need collaboration to move through life.  Even as we head into Jesus’ last days we find our story in the midst of collaboration. God is all about collaborating.  While Jesus has just paraded through town, in order to move to the next location he makes it not all about him.  He asks disciples to go prep the space, to use someone else’s space and to collaborate for the next moment.  The story is not complete without them and it is certainly not complete without us this many years later.  We are part of the story. That is what this week is all about.  Even Jesus betrayal was a collaboration between authorities and one of Jesus’ best friends.  The story just keeps becoming something else with a new character.

Our story is not complete and our lives can’t be in a vacuum.  Where are collaborating? Where do you need to open yourself up to community?  How can we help each other out?