Today’s scripture: Jonah 4:1-11 – But this was very displeasing to Jonah, and he became angry.  He prayed to the Lord and said, “O Lord! Is not this what I said while I was still in my own country? That is why I fled to Tarshish at the beginning; for I knew that you are a gracious God and merciful, slow to anger, and abounding in steadfast love, and ready to relent from punishing.  And now, O Lord, please take my life from me, for it is better for me to die than to live.” And the Lord said, “Is it right for you to be angry?” Then Jonah went out of the city and sat down east of the city, and made a booth for himself there. He sat under it in the shade, waiting to see what would become of the city.

The Lord God appointed a bush, and made it come up over Jonah, to give shade over his head, to save him from his discomfort; so Jonah was very happy about the bush.  But when dawn came up the next day, God appointed a worm that attacked the bush, so that it withered.  When the sun rose, God prepared a sultry east wind, and the sun beat down on the head of Jonah so that he was faint and asked that he might die. He said, “It is better for me to die than to live.”  But God said to Jonah, “Is it right for you to be angry about the bush?” And he said, “Yes, angry enough to die.”  Then the Lord said, “You are concerned about the bush, for which you did not labor and which you did not grow; it came into being in a night and perished in a night.  And should I not be concerned about Nineveh, that great city, in which there are more than a hundred and twenty thousand persons who do not know their right hand from their left, and also many animals?”

Gosh, I hope you all forgive me for this but I am really loving this line of Jonah stories in the line up of scripture.  There are so many things about the above story that I am loving this morning that speak to me. It has been a while since I spent any time in Jonah.  What I am loving is just how human this whole story is and really confronts our very human emotions with God’s awesome responses.  In Lent, I need a few doses of humanity to help me confront my own stuff and this morning resonates because I don’t know about you but sometimes I get really angry with God.  I love that Jonah gets angry with God.  In fact, Jonah gets so angry with God that he just keeps claiming that he is so angry he will die.
Dramatic, much?
Jonah had some expectations and God did not follow those expectations.  I can relate. I am someone that has expectations. I get really grumpy if all of a sudden those expectations don’t match up without warning. I get upset when people use each other.  I get pretty down and depressed when it feels as though the world isn’t matching up to what it should be.  I get confused when people get nit picky with one another and it makes me want to hide under a bush.  And when I don’t think God steps up enough or hasn’t shown up lately I definitely pout and get dramatic. I get angry at God for a plethora of things from my petty things to why in the world is there world wide hunger? I don’t understand and I get angry.  I especially get to this point when I haven’t been taking care of myself at all.  Because then, I don’t have the reserves to handle even the littlest of things.  That is when I definitely desperately need to go find a place to let a bush grow over me to shade me and cool me down.

And I love how God responds to us in those times….hey, take a moment.  Take a breath.  Listen to what is going on with you and then give it back to me, ok?  I love that God has a convo with Jonah….are you really going to get angry about something that is about me?  And I LOVE that God holds Jonah accountable for his dramatic tendencies. God is concerned about people and will always be concerned about people. God let’s us know that it is ok to get angry and then we have to have the convo with God.  God can handle it. God chooses mercy over petty.  And God still cares for us and walks alongside us even when we are acting like a three year old and pouting along the way.  A good reminder for me who is starting to walk around like I have something to be truly angry about. 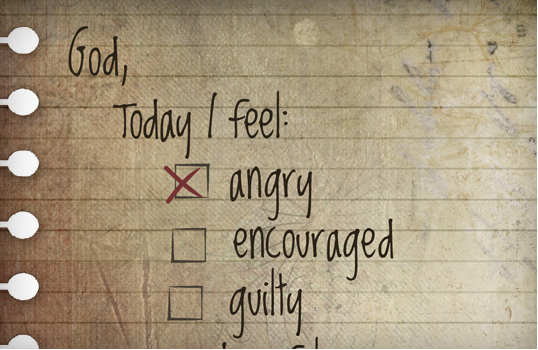 A week ago I took just a couple of extra days off.  I knew it was time because I barked at one of our regular homeless guys.  He and I got into a little bit of a more intense discussion than usual.  Neither one of us deserved it but we were both exhausted from life in different ways and we took it out a little on each other.  I walked away muttering and he walked away mad at me.  We both had points.  And we might both be a bit stubborn (one of those traits I work on pretty constantly).  I was in meetings the rest of the day but recognized in me that I really had little reserves left to take perspective.  I came back the next day and he opened the door of the church wide for me. We had a good talk, both apologized and admitted our humanness to one another.  He acknowledged the need for the boundary and I acknowledged I was just….angry because I was tired.  We moved on.  It happens but the way we deal with what happens means we acknowledge that God just showed up.  We need to have these conversations and we need to care for one another.
May you find these spaces of sacred today.  If you are angry, will you acknowledge it and have the convo with God? Will you care for yourself in the midst of it?  Will you find a place to cool down and get the drama out?
Peace friends,
Courtney