Can you believe it is the fourth Sunday already?  Just two Sundays and Easter left!

Today’s scripture: John 18: 28-40 (NRSV)   Then they took Jesus from Caiaphas to Pilate’s headquarters. It was early in the morning. They themselves did not enter the headquarters, so as to avoid ritual defilement and to be able to eat the Passover. So Pilate went out to them and said, “What accusation do you bring against this man?”  They answered, “If this man were not a criminal, we would not have handed him over to you.” Pilate said to them, “Take him yourselves and judge him according to your law.” The Jews replied, “We are not permitted to put anyone to death.”  (This was to fulfill what Jesus had said when he indicated the kind of death he was to die.)Then Pilate entered the headquarters again, summoned Jesus, and asked him, “Are you the King of the Jews?”  Jesus answered, “Do you ask this on your own, or did others tell you about me?” Pilate replied, “I am not a Jew, am I? Your own nation and the chief priests have handed you over to me. What have you done?” Jesus answered, “My kingdom is not from this world. If my kingdom were from this world, my followers would be fighting to keep me from being handed over to the Jews. But as it is, my kingdom is not from here.” Pilate asked him, “So you are a king?” Jesus answered, “You say that I am a king. For this I was born, and for this I came into the world, to testify to the truth. Everyone who belongs to the truth listens to my voice.” Pilate asked him, “What is truth?”

After he had said this, he went out to the Jews again and told them, “I find no case against him. But you have a custom that I release someone for you at the Passover. Do you want me to release for you the King of the Jews?” They shouted in reply, “Not this man, but Barabbas!” Now Barabbas was a bandit. 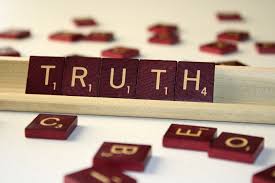 Today at the CoOp we are taking on talking about truth.  Pilate asks about it and Jesus seems to embody it.  I have never taken this piece of scripture apart (and you will have to hear my sermon this morning to hear more about it piece by piece) but in this path we are taking through the Narrative Lectionary we get to delve more into these stories we usually just spend time on in Holy Week.  Today we talk about speaking truth to power and what is truth?
I have been pondering a lot about this scripture and how to preach it.  It is not an easy topic to preach.  We are called to speak truth and yet we don’t always know why it is what it is.  This morning, for you to chew on, I am leaving you with poetry.  Poetry opens up truth to us in different ways (by the way, notice I am not aligning truth with fact).  Truth speaks to us and calls something in us.  Truth is embodied, not necessarily just told.
So I am giving words from Mary Oliver to you (probably my favorite poet).  These are words about who we are and who we might be called to be…..enjoy….:

Who made the world?
Who made the swan, and the black bear?
Who made the grasshopper?
This grasshopper, I mean-
the one who has flung herself out of the grass,
the one who is eating sugar out of my hand,
who is moving her jaws back and forth instead of up and down-
who is gazing around with her enormous and complicated eyes.
Now she lifts her pale forearms and thoroughly washes her face.
Now she snaps her wings open, and floats away.
I don’t know exactly what a prayer is.
I do know how to pay attention, how to fall down
into the grass, how to kneel down in the grass,
how to be idle and blessed, how to stroll through the fields,
which is what I have been doing all day.
Tell me, what else should I have done?
Doesn’t everything die at last, and too soon?
Tell me, what is it you plan to do
with your one wild and precious life?