re we ready for Monday?  Good morning!

1As he walked along, he saw a man blind from birth. 2His disciples asked him, “Rabbi, who sinned, this man or his parents, that he was born blind?” 3Jesus answered, “Neither this man nor his parents sinned; he was born blind so that God’s works might be revealed in him. 4We must work the works of him who sent me while it is day; night is coming when no one can work. 5As long as I am in the world, I am the light of the world.” 6When he had said this, he spat on the ground and made mud with the saliva and spread the mud on the man’s eyes,7saying to him, “Go, wash in the pool of Siloam” (which means Sent). Then he went and washed and came back able to see. 8The neighbors and those who had seen him before as a beggar began to ask, “Is this not the man who used to sit and beg?” 9Some were saying, “It is he.” Others were saying, “No, but it is someone like him.” He kept saying, “I am the man.” 10But they kept asking him, “Then how were your eyes opened?” 11He answered, “The man called Jesus made mud, spread it on my eyes, and said to me, ‘Go to Siloam and wash.’ Then I went and washed and received my sight.” 12They said to him, “Where is he?” He said, “I do not know.” 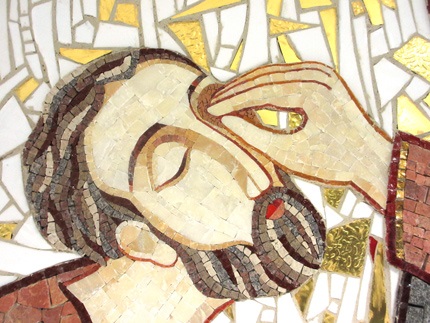 This is actually one of my favorite stories in the gospel of John.  The disciples and Jesus are just walking along and they see this guy who happens to be blind. In the ancient world, if you were disabled in any way it was someone’s fault.  It would be explained by parental sin if someone was blind by birth for example or it would be the person’s sin if they became blind. In any instance, it was someone’s fault according to tradition. There had to be some explanation.

Let’s pause there. I love this because I think it names what many of us do.  If something happens, there must have been some kind of reason for it happening.  I know that my brain goes through this process even though that is not really my theology at all. But our brains still hold true to part of this tradition and I think for some people they think this is true.

But Jesus blows us all away and it makes me smirk when he says that isn’t the case. He is re framing the conversation. When the disciples ask him why he says that this guy was just born this way. He was born this way because then he could be who he is.  Jesus will open his eyes so that they might see God show up but he just is…not because of sin or anything that was done to him. It just is.

Jesus will then make the blind man see and it will create all sorts of havoc within the framework of the tradition.  And the man will just keep telling the story which means he keeps shifting the paradigm. It seems like a comedy of errors.  I love it.

By Jesus answering the question by…it just is and allowing the scene to take on grey he shifts the entire view of what it means to follow God. It is not about avoiding sin but about letting God shine.  How refreshing is that? Sometimes things just are…not because God did it or anyone else did anything but God will show up anyway in the midst of it. And that will be good and confusing and odd and interesting and….it might take a while to sort out.