Good morning everyone!  We made it to mid week!

1 1-3 Job was a man who lived in Uz. He was honest inside and out, a man of his word, who was totally devoted to God and hated evil with a passion. He had seven sons and three daughters. He was also very wealthy—seven thousand head of sheep, three thousand camels, five hundred teams of oxen, five hundred donkeys, and a huge staff of servants—the most influential man in all the East!

4-5 His sons used to take turns hosting parties in their homes, always inviting their three sisters to join them in their merrymaking. When the parties were over, Job would get up early in the morning and sacrifice a burnt offering for each of his children, thinking, “Maybe one of them sinned by defying God inwardly.” Job made a habit of this sacrificial atonement, just in case they’d sinned.

6-7 One day when the angels came to report to God, Satan, who was the Designated Accuser, came along with them. God singled out Satan and said, “What have you been up to?”

Satan answered God, “Going here and there, checking things out on earth.”

8 God said to Satan, “Have you noticed my friend Job? There’s no one quite like him—honest and true to his word, totally devoted to God and hating evil.”

9-10 Satan retorted, “So do you think Job does all that out of the sheer goodness of his heart? Why, no one ever had it so good! You pamper him like a pet, make sure nothing bad ever happens to him or his family or his possessions, bless everything he does—he can’t lose!

11 “But what do you think would happen if you reached down and took away everything that is his? He’d curse you right to your face, that’s what.”

12 God replied, “We’ll see. Go ahead—do what you want with all that is his. Just don’t hurt him.” Then Satan left the presence of God.

13-15 Sometime later, while Job’s children were having one of their parties at the home of the oldest son, a messenger came to Job and said, “The oxen were plowing and the donkeys grazing in the field next to us when Sabeans attacked. They stole the animals and killed the field hands. I’m the only one to get out alive and tell you what happened.”

16 While he was still talking, another messenger arrived and said, “Bolts of lightning struck the sheep and the shepherds and fried them—burned them to a crisp. I’m the only one to get out alive and tell you what happened.”

17 While he was still talking, another messenger arrived and said, “Chaldeans coming from three directions raided the camels and massacred the camel drivers. I’m the only one to get out alive and tell you what happened.”

18-19 While he was still talking, another messenger arrived and said, “Your children were having a party at the home of the oldest brother when a tornado swept in off the desert and struck the house. It collapsed on the young people and they died. I’m the only one to get out alive and tell you what happened.”

20 Job got to his feet, ripped his robe, shaved his head, then fell to the ground and worshiped:

21 Naked I came from my mother’s womb,
naked I’ll return to the womb of the earth.
God gives, God takes.
God’s name be ever blessed.

22 Not once through all this did Job sin; not once did he blame God. 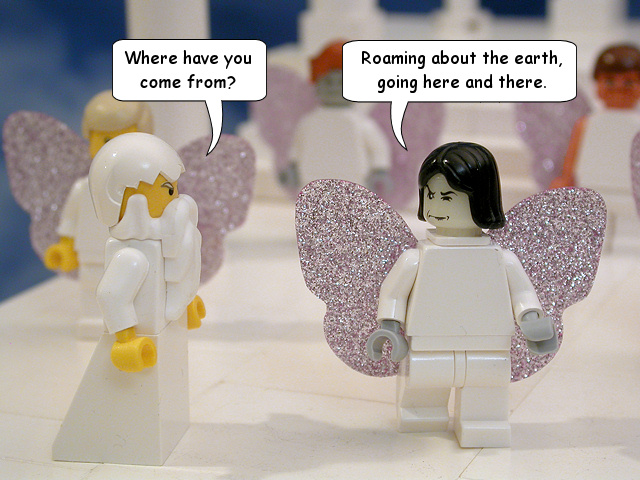 When I was a little girl I was obsessed with these movies called, “Faerie Tale Theatre.” We would go to the video rental place and I would definitely negotiate with my brothers on bringing one home to watch. Later when they came out  on tv we recorded them on VHS and I would watch and re watch them.  They were the faerie tales put to the stage. My favorite has always been the dancing princesses although Rapunzel was a definite classic.  I just looked up a few clips and it all came flooding back to me. I bet I could play each one in my head to a line or even recite some of them.

I have always been very very captivated by fairy tales. I am not sure why. Even today I sometimes tune into the show, “Once upon a time” even though it is full of drama and pretty ridiculous (about a town here full of fairy tale figures that bounce between here and their alternate worlds).

What I loved about Faerie tale theatre and about the actual tales is not the romance that sometimes happens at the end, it is actually some of the dark stuff that happens to make it a really great story.  The show Faerie Tale Theatre was not about pink and princesses….as I look back, the filming was all pretty dark and at times the stories got pretty twisted.  They played out the consequences or the birds pecking at eyes (name that tale?) or the deep sadness that comes as losing someone you love.  They were made for children but didn’t gloss over every little thing. Usually they ended up in happiness but it took time to get there.  This is the stuff of a really really great story. There is the set up of location and context and all that was before this thing happened. There is the challenge and then the difficulties.  What happens in the mess is what makes it truly captivating and beautiful.

Maybe this is why I love the book of Job so much.  Job is a story told to the people to talk about things. Stories allow us a landscape to ask questions and make sense of stuff.  People are suffering…why? how do we deal with it? Where is God in all of us this mess?

Out of that set up comes this tension between God and humans, between humans and other humans, between the persecutor or challenger (Satan…notice not the devil) and God and most of all, out of all of this comes the beauty of poetry, response, and God’s whirlwind.

I love the set up of the story in today’s tale.  It is a really really great story. It helps us place ourselves in the midst of it.

What is the story you will talk about today?

If you want to just glance at production value…here is a 9 minute clip from The Frog Prince.   Robin Williams plays the frog… 🙂