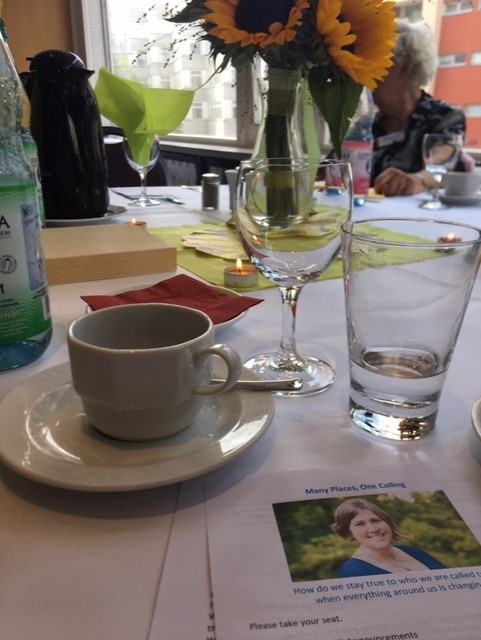 A few weeks ago, I was approached by the leader of a group that organizes a “Christian Women’s Brunch” each month.  She told me about how this group gets together to hold Christian felllowship for women in English each month and I was asked to be the speaker for September.  This would involve speaking for 30-45 minutes about a topic that we chose for the month.  This person had heard me preach and thought I would be the perfect person to talk about calling, especially in September when it feels like everything is in transition.  She explained that many of the women had come to Berlin, like me, to accompany their partners.  Some, like me, had ended up in Berlin not really by their choice to move to Berlin per say.  She also explained that this was a place where a variety of theological perspectives were welcome and so she thought I might do well in presenting about call, not in a certain theological camp, but understanding that all of us have a call on our lives from God.

I agreed to speak and then prepared for what was to come.  In payment for my speaking, i got to go to the brunch for free and bring Ana with me as well.  While I was hesitant in seeing if Ana wanted to come, Christian women’s brunches are always people’s jam, Ana was eager to come with me and support me.

Just a few days beforehand, the leader checked in with me and made sure all was well.  I was a little concerned by how some of my more conservative sisters would receive me since I have been known to be out.  I feel like I have done my work around being out and creating spaces of self awareness and the awareness of others. I am not naive. I know that there will be consequences to me speaking as an out pastor…unfortunately, there usually are consequences when I speak. But I was assured that while she was surprised some were already reacting, she was ready.

So brunch was still on for me and I arrived yesterday. I was not surprised to find a mostly older crowd and in fact, I settled right in at home.  These kinds of things feel more like home to me than many other things but I watched as Ana was taking it all in…the decorations, the older crowd, the biblical key chains for us to take home, the interactions…In fact, I am hoping that she will be a guest and write a blog on her impressions as well.

The time came for me to speak and I opened myself up to the 40ish women gathered around and talked about God’s call on my life, set apart to do God’s work. I talked about how that call has changed and in what places and then talked about my call in Berlin as I continue to see it revealed to me…still as pastor in this place but with a larger congregation than just one that can claim me.  I am still figuring it out but it seems so clear to me that I am still doing the work of God in my daily life.

It seemed to be well received and as we moved into conversation time I asked the older woman sitting next to Ana if she grew up in Berlin.

“No, I grew up in a small town outside of Berlin but my first memories are of 1941 and hearing bombs fall and being held by a parent in the basement.”

My mouth dropped open.  This women told me stories then of in her 60s after she had helped her husband do his work as a diplomat all of his life and studying biology that she went back for her phd in art, after suing the school to be admitted in her old age! My mouth got wider.  Here, in front of me, is living history and as I then looked around the room to see more women who grew up here and are in their 80s I realized that my world looked so different in some ways to these women.  And then I was humbled to be sitting in that space, eating our pastry next to one another.

It was a day!  We walked away with flowers in our hands and ready to rest and process the rest of the day.  These little surprises await us around every corner if we are willing to say yes and to ask.