Eutychus Raised From the Dead at Troas

On the first day of the week we came together to break bread. Paul spoke to the people and, because he intended to leave the next day, kept on talking until midnight.  There were many lamps in the upstairs room where we were meeting.  Seated in a window was a young man named Eutychus, who was sinking into a deep sleep as Paul talked on and on. When he was sound asleep, he fell to the ground from the third story and was picked up dead.  Paul went down, threw himself on the young man and put his arms around him. “Don’t be alarmed,” he said. “He’s alive!”  Then he went upstairs again and broke bread and ate. After talking until daylight, he left. The people took the young man home alive and were greatly comforted. 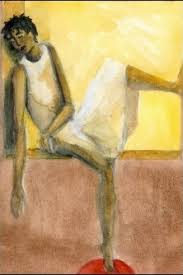 This story is so great! While we were in Corvallis, Jim Fellers and I used to tell the kids about this story when we gave out bibles to illustrate that there are so many crazy stories in the bible! Paul literally talks someone to sleep and then to death. He falls out of the window! It’s super crazy!
Then I think about when my brothers and I were younger and Oregon had that earthquake that seemed really major to us.  Now, as we look at world events, it seems pretty puny but at the time we were pretty shaken.  I woke up with a start to see my brother Grant running around preparing for death and worrying way too much and then looking to my brother Andrew who slept right through the entire experience.  His response when he woke up? “Well, I sleep like the dead…”
Who comes up with this stuff?  What is the author of Acts trying to tell us?  Is it ok to sleep through sermons and  big events? Is the Lord’s supper just too boring?  And then I realize that last bit about bringing the boy back to life….
In a world full of grief right now because of crazy happenings, it may not be such a bad idea to remember a few things from this passage.  First of all, when Christians gather around to talk, they break bread together.  Paul gathers his church around him and they break bread and eat and remember.  This is something we get to do especially in the weeks to come.  Part of Holy Week is the experience of breaking bread together and remembering.  Part of remembering anyone is breaking bread together and telling stories.  I am presiding at two memorials this week…one today and one on Saturday.  Part of the experience has been remembering that person while we drink coffee or commune together.  And part of the experience is figuring out how others can remember the person.  That’s so important!
The other piece of this passage to zone into is that the boy who falls out of the window is brought back to life! Paul wraps his arms around him and assures the people around him that the boy is ok.  Paul gets to do these things! That’s significant! AND there is much comfort in this resurrection.  This gives  us hope for what is to come in the next few weeks.
In the meantime, how will you break bread and remember those who have gone before us this week?
And no falling out of windows!
Court