While he was trying to figure a way out, he had a dream. God’s angel spoke in the dream: “Joseph, son of David, don’t hesitate to get married. Mary’s pregnancy is Spirit-conceived. God’s Holy Spirit has made her pregnant. She will bring a son to birth, and when she does, you, Joseph, will name him Jesus—‘God saves’—because he will save his people from their sins.” This would bring the prophet’s embryonic sermon to full term:

Watch for this—a virgin will get pregnant and bear a son;
They will name him Immanuel (Hebrew for “God is with us”).

Then Joseph woke up. He did exactly what God’s angel commanded in the dream: He married Mary. But he did not consummate the marriage until she had the baby. He named the baby Jesus.

For many of you this text will come up tomorrow in the lectionary.  Because we are preaching off of a different lectionary (and I didn’t really want to write on 2 Samuel today) I decided to go here today.  I hope you won’t mind. Everyone have their sermon already?

This passage focuses on Joseph’s experience of Jesus’ birth.  Joseph doesn’t show up much in a lead role (usually supporting) but Matthew needs Joseph.  He is major player in making sure Jesus comes from David’s line.  In fact, Matthew’s birth narrative begins with a whole chapter of establishing Jesus’ heritage, his story, his lineage.  This whole thing can only work if Jesus comes from where the prophets tell us…the line of David.  Joseph is from that line.  This makes this story something. Joseph has to buy in.

I am really drawn more to Mary’s story…with the Magnificat and all. I usually leave Joseph somewhat behind.  He is necessary but not that necessary.  I have looked at Mary imagery quite a bit. But what about Joseph? So I googled Joseph art.  Here are a few samples…. 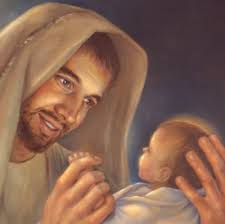 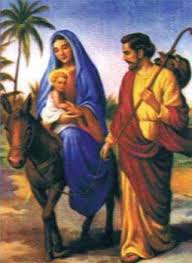 There is not a ton of variety.  He is supportive, admiring and in a majority of the pictures, quite a bit older than Mary. He seems to be steady. He gazes on with admiration either to the child or the whole scene.  He doesn’t really exude much of anything.  He is a supporting character.

Which is why when I re looked at this story, I was blown away at how active he is! Joseph reacts to direct God interaction.  He responds from a dream…which can be powerful.  He immediately reacts.  He contemplates and weighs the pros and cons.  Joseph is a man that we maybe should pay more attention to. Joseph puts everything on the line for some sketchy dream that God presents  him.  He realizes that God has something for him that does not fit the typical story line.  Joseph responds.

How will I listen today? How will I respond?  Can I pattern my response from Joseph’s faithful call?

What do you think preachers?