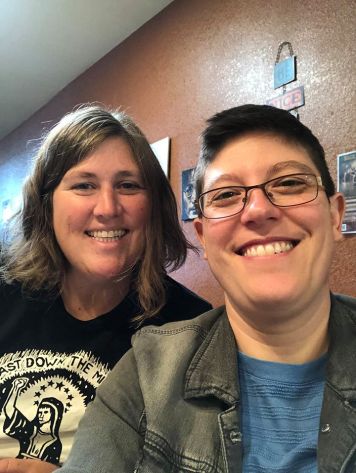 This is Ruth Sterner.  I met Ruth in 2014 through my now ex wife.  They had been friends for a while and it was important that I meet Ruth.  Ruth hails from Colorado and came to Corvallis Oregon for school.  She then started working for Oregon State University and that is when I met her.

In 2016, when I was living in the parsonage next door to the Rose City Park UMC, Ruth moved in to be the third person living in that amazing and huge old house.  She had approached us and wanted something different for her life.  We talked it over and talked with the church and decided that we could share that immense space in the midst of a housing crisis in Portland. Plus, it’s Ruth and we knew that she could only be an amazing addition to the house.  The pups were thrilled to have a third human on their team who was home sometimes more than the other two humans and was eager to cuddle with them like crazy.

Ruth became one of my dearest friends during the year that we all lived together. There were many days when I would make the long trek from the church to the parsonage (a ginormous 10 feet or so) to get some lunch or to take a breather and I would end up hanging out with Ruth.  We talked about our lives and also spent a lot of time just giggling about a number of ideas, schemes, jokes and funny things in life.  Ruth is one of my favorite people to laugh about the weirdness of life with.  Just the other day I was walking along and remembered a tv show idea that we had and started giggling all the way home. I immediately texted Ruth to tell her the idea must come into being and I could imagine her immediately giggling along as she also remember the incredible show idea (I am telling you, you want to see this).

Ruth Sterner loves soccer, specifically women’s soccer to the point where she will fly somewhere in the world with the dyed hair color that matches the team’s colors she is routing for.   Ruth is loyal to her people and cares deeply for the pups and children in her life.  She is an amazing aunt to the kiddos she lives with now.  After a year of discernment, Ruth moved back to Corvallis and went back to school to be an occupational therapist which she now is.  She lives with a family that make up her chosen family and best friends and is the third human to little humans that makes all the difference in their lives.  Ruth is caring and empathetic and has always been there when I need her over the past 6 years that I have been lucky to call her part of my chosen family.  Ruth cares deeply about the world but also doesn’t let the little things get her upset. She has a way of giving me clarity on things that I get worked up over.

Ruth loves a good board game and is up for adventure.  She is always up for a travel idea and is quick to show her wit.  Ruth is supportive and kind even when something isn’t her deal (ie she has supported me in many church adventures and has heard me preach more than once) and is always up for going out to breakfast (as am I fyi).

And as always this is just the tip of the iceberg on this incredible person….